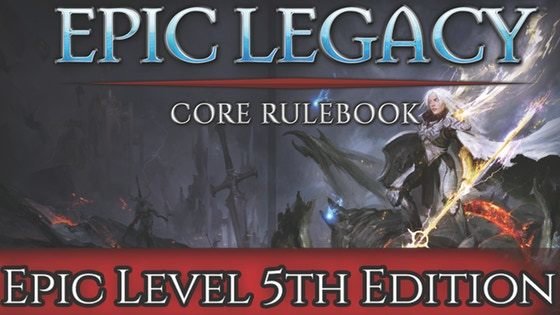 Will the content in the Epic Legacy Player's Guide be in this Project?

YES! Everything in the Epic Legacy Player’s Guide will be integrated into the Epic Legacy Core Rulebook. This means it will receive significant updates to address balance issues, reformatting for a unified ascetic, and gone over with a fine toothed comb for typos and other errors.

Players will also receive new content for characters of all shapes and sizes, the previews of which can be found in the project’s story.

That is a great question! And one we asked ourselves almost immediately when we started this project. Its guided our design on almost every level, so we definitely understand that concern.

I could talk for days about how we approached this issue, but I think it would be best if I laid out our process on how we tackled the issue.

Firstly, we operated from a position that the martial classes would be more powerful than the spellcasters. Meaning their average damage per round would be higher, their abilities more useful, and their utility more significant. Throughout the testing of each class, we would then nerf the martial classes down until they got within an acceptable range of a spellcasting class.

Secondly, we felt just scaling the already existing class framework to epic strength (ie. just increasing the raw numbers) was the wrong approach. We have played older edition’s renditions of this concept, and the results were disastrous. Instead, each classes Epic advancement from 21-30 would be marked by a new “Epic Mechanic”, meaning a new tool that the class would acquire that would scale with their epic level. Some base features would still improve, but this “Epic Mechanic” was the primary focus. This mechanic NEEDED to be a few things.

Swinging all this back to martial classes, because of these rules we set for ourselves they were the HARDEST to design by a huge margin (Ranger in particular gave me headaches for months and went through over four playable models). But, when it came to playtesting, not only were people playing these classes chosen by often (if not the most often), they were performing extremely well when compared to the spellcasting classes. We still wanted those casters to have those world shattering magic, but the cost associated with it was high, and the ability to do so limited enough, that martial characters could have their day in the spotlight over the course of several encounters while the Wizard was waiting for the right moment to cast Pyroclastic Cannon. Some of the martial abilities do border on the supernatural, and in the Core Rulebook we will talk about how to incorporate these supposedly normal people doing truly absurd things with their bodies as a Dungeon Master, but in terms of how it plays, you’ll find martial classes in Epic Legacy to be some of the most effective classes in a lot of scenarios.

Fun fact, the Epic Barbarian currently holds the record for most damage done in a single hit, at over 1600! It also involved no cheese or assistance from other classes, was done with just the raw mechanics.

BackerKit is a service that crowdfunded project creators use to keep track of hundreds to tens of thousands of backers—from shipping details, pledge levels, preferences and quantities, whether they have paid or had their card declined, special notes, and everything in between!

The BackerKit software and support team is independent from the campaign’s project team—BackerKit does not handle the actual reward shipping. For more information about the preparation or delivery status of your rewards, please check the project's updates page.

How does BackerKit work?

After the campaign ends, the project creator will send you an email with a unique link to your survey. You can check out a walkthrough of the process here.

I never received my invitation. How do I complete the survey?

The most common reasons for not receiving a survey email is that you may be checking an email inbox different from the email address you used to sign up with Kickstarter, Indiegogo or Tilt Pro account, or it may be caught in your spam filter.

Confirm that the email address you are searching matches the email address tied to your Kickstarter, Indiegogo, or Tilt Pro account. If that doesn’t work, then try checking your spam, junk or promotions folders. You can also search for "backerkit” in your inbox.

To resend the survey to yourself, visit the project page and input the email address associated with your Kickstarter, Indiegogo or Tilt Pro account.

How do I update my shipping address?

When will my order be shipped, charged or locked?

That is handled directly by the project creator. BackerKit functions independently of the project itself, so we do not have control of their physical shipping timeline. If you want to check on the project’s status, we recommend reading over the project's updates page.

I completed the survey, but haven't received my rewards yet. When will they arrive?

As BackerKit does not actually handle any rewards or shipping, the best way to stay updated on the shipping timeline would be to check out the project's updates page.

You may not have an account. You can create an account by clicking the account confirmation link in any survey you have. You can also get started with signing up for a BackerKit account here.

If you have created an account and have gone through the previous steps, but are still having trouble, please reach out to us via the contact form. Let us know any important details (browser type, mobile device or computer, OS, etc).

Do I need a BackerKit account to fill out/receive my survey?

You may or may not have an account set up, but you can access the Account Request Confirmation from the bottom of the confirmation page of any of your surveys.

How do I update my email address in my backer account?

Contact BackerKit support by signing in to your BackerKit account, and then clicking on “Need Help?” in the top right side of the page! We will ask you to verify that you are the account holder; and to provide the new email address to which you would like to update your account. You can verify by your ownership of your backer account by either of the following methods:

* Sending us a screenshot of your original pledge that shows your backer number on Kickstarter (or Indiegogo, etc).

While signed in to your BackerKit account, click on “Need Help?” on the top right side of the page.

BackerKit is a service that crowdfunded project creators use to keep track of hundreds to tens of thousands of backers—from shipping details, pledge levels, preferences and quantities, whether they have paid or had their card declined, special notes, and everything in between!

The BackerKit software and support team is independent from the campaign’s project team-BackerKit does not handle the actual reward shipping. For more information about the preparation or delivery status of your rewards, please check the project's updates page.

A backer account helps backers (like you!) to keep their surveys organized. Oftentimes, people who support projects that use crowdfunding support multiple projects across crowdfunding platforms. Any project that uses BackerKit will appear in your BackerKit account, and will allow you to help keep track of updates such as address, items, timelines, support, etc.